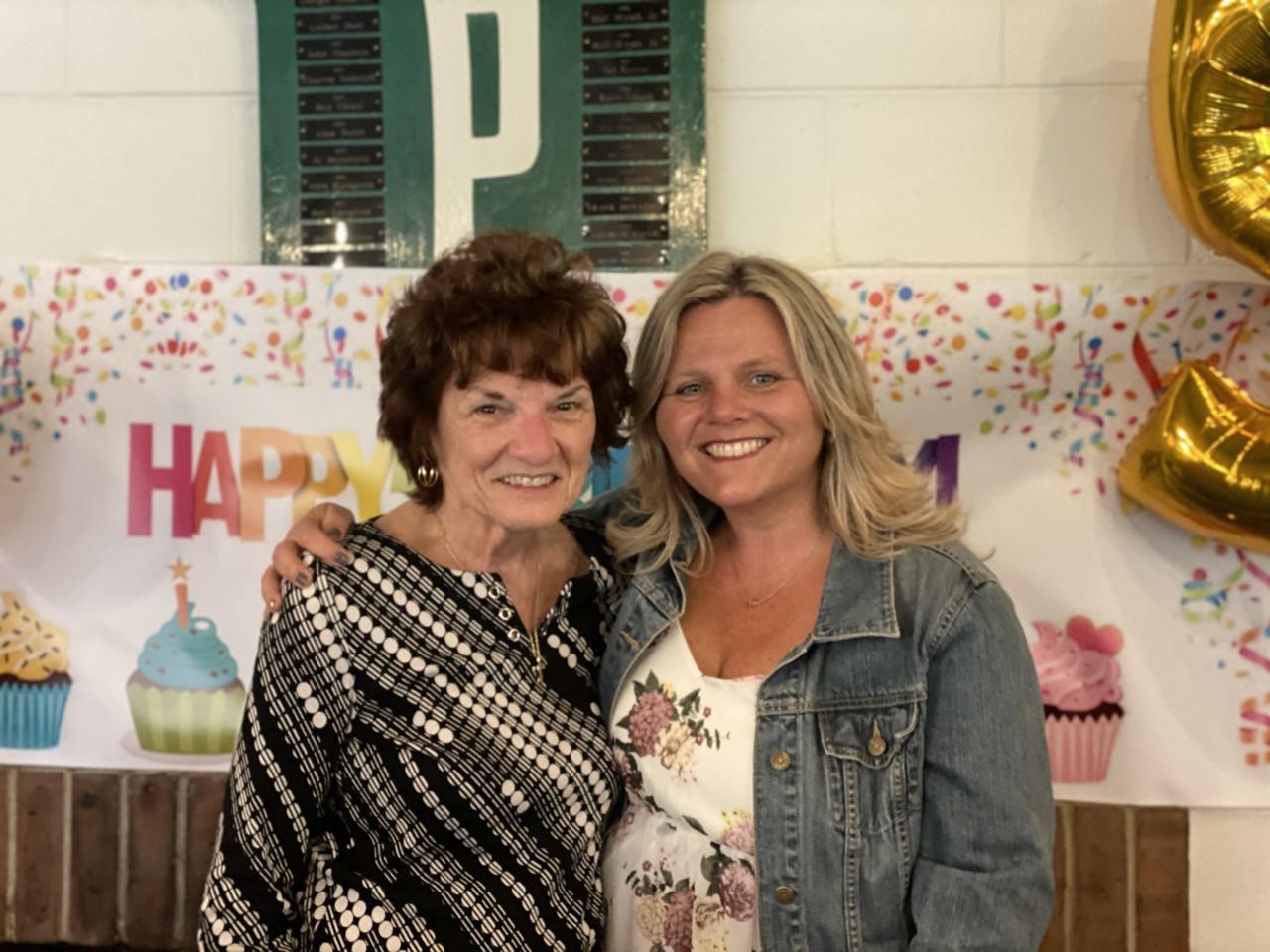 “The entire time I was loading gels and looking for cancer gene mutations, I was standing there with BRCA2 – and had no idea.” – Theresa

Done sooner, it might have alleviated her mom’s cancer journey – or allowed her to make more informed decisions. Their story is not a typical one.

Theresa Colligon has worked in Penn Medicine research labs since 1995. In the early 2000s, her department needed blood samples for a study of the BRCA1 gene mutation.

BRCA1 is one of about 20,000 genes inside of the human body. When a person’s BRCA1 gene is mutated, they have a significantly higher chance of developing various cancers – breast and ovarian cancer in particular. And because gene mutations are hereditary, they can be passed from both men and women to sons and daughters. A parent with a cancer risk gene mutation has a 50% chance of giving it to their child.

In her push to meet that early 2000s BRCA1 research deadline, Theresa, who’s also a phlebotomist, recruited family members at her family reunion – including her sister, her grandmother, and her mother, Patti Ward – to donate blood to the study. Even though her grandmother had survived breast cancer at that point, Theresa didn’t necessarily suspect that they carried a BRCA1 mutation. She was in work mode, focused on acquiring the number of samples needed and adding them to the larger data lot. Still, the study outcome provided some relief.

“Through my work in the lab reviewing all of the samples, I could see that none of us in my family had a BRCA1 mutation,” Theresa says. “I never thought about those blood samples again.”

Fast forward a handful of years. Theresa’s mom Patti, now in her early 60s, is diagnosed with Ductal Carcinoma in Situ (DCIS), an early-stage breast cancer of the milk ducts. She undergoes more than a dozen radiation treatments and has her left breast removed but the DCIS proves aggressive, returning a second time.

A few years after successfully beating DCIS, in 2009, another unexpected blow: Patti learns she has metastasized cancer in her sacrum as well as lobular carcinomic cancer. She undergoes hormone replacement therapy and more radiation. Genetic testing came up once in conversations with doctors, but was more costly than it is today, and Patti was just under the age when Medicare would cover it. She put it out of her mind – but was baffled by what felt like a never-ending cancer diagnosis.

“I’d never smoked, really never drank, and yet I kept waking up with cancer,” Patti says.

In November 2016, Dr. Susan Domchek, Theresa’s supervisor and executive director of the new Basser Center for BRCA at Penn Medicine, is starting a study of BRCA2, another gene mutation linked to increased risk of cancer. Her team, which includes some of Theresa’s colleagues, revisits the blood samples from the BRCA1 study 12 years earlier – and finds something shocking.

Theresa is at work at Penn Medicine when she gets the call.

“Dr. Domchek said, ‘I need to talk to you about those old study samples,’” Theresa remembers. Dr. Domchek’s tone and the fact that she had called – not emailed – were hints that something was wrong.

“I met Dr. Domchek in her office and she said, ‘Sit down.’” Dr. Domchek explained to Theresa that when one hundred random deidentified controls from the early 2000s research were submitted for BRCA2 testing, two of them came back with the same exact BRCA2 mutation.

“My first thought was, ‘I did something wrong,’” Theresa says. “That I maybe mislabeled the samples back in 2003, and allocated the same person twice. I thought that Dr. Domchek was going to say we had an issue and would have to do a retraction.”

But that’s not why Dr. Domchek had called Theresa. She broke the news to her employee:
The two study participants with BRCA2 mutations were Theresa and her mother, Patti.

“You might think that doing what I do for a living, dealing with cancer research every day, I wouldn’t be so upset,” Theresa says. “But I was inconsolable, mostly at the thought of my mom – what this gene mutation had done to her and what more it might do to her.”

Then Theresa’s thoughts turned to her own health. Though she’d never had cancer, her mother’s health history and the BRCA2 reality put her at an incredibly high risk for breast and ovarian cancer.

“I immediately thought, ‘I have two young sons at home. I need to get my ovaries removed.’”

Clinical testing and genetic counseling began at Penn Medicine for both Theresa and Patti. In keeping with protocol, they were instructed to reach out to family – including extended family – to let them know about the discovery and the possibility that they, too, might carry a BRCA2 mutation.

“We got the letter to send to all of our family members, which we sent, and we made phone calls, too,” Patti remembers.

One of those phone calls revealed a shock: distant cousins on Patti’s late father’s side already knew they had a BRCA2 mutation. They’d found out eight years prior…but had confused instructions about communicating the news to family. Instead of notifying all relatives, they’d only notified family members who’d already had cancer.

It was information Theresa, Patti, and their doctors just wished they’d gotten sooner.

The Shock Wears Off

Still, the BRCA2 discovery helped explain what had been driving Patti’s cancer.

“Suddenly it all made sense,” Theresa says. “My mom had been developing tumor after tumor, which didn’t add up for standard DCIS – but checks out for someone with a mutated BRCA2.”

The news also helped Theresa take the reins of her own future. Consulting with her clinical team at Penn Medicine, she opted to undergo a preventative hysterectomy in January 2017, only two months after the BRCA2 discovery. She held off on a mastectomy to start (“It was a harder decision than I expected,” she says). But then her mom Patti developed a triple negative tumor in her remaining breast in 2018. Seeing her mother’s diagnosis as a crystal ball of sorts, Theresa scheduled her preventative double mastectomy and never looked back.

Knowledge is Power – and Peace

Patti underwent successful chemotherapy for her triple negative cancer. Today, at age 77, she has a clean bill of health, participates in medical studies whenever she’s eligible (“I just want to help people!”), and undergoes bloodwork every six months at Penn Medicine.

“It’s done! It’s over!” Patti says of her cancer. “But had we known about the BRCA2 mutation earlier, I might have been able to dodge some or all of that treatment.”

Theresa just celebrated her 50th birthday. Today she is Director of Operations for Penn Medicine’s Clinical Vaccine Production Facility in the Center for Cellular Immunotherapies and also enjoys a clean bill of health – and the peace that comes from her decisions.

“I had breast reconstruction following my double mastectomy and I look and feel like me again,’ she says. “I don’t feel like any less of a woman. In fact, I feel empowered. My kids don’t have to worry about me developing cancer, and that’s ultimately what was most important to me. Knowing I did my part, I have pretty much stopped worrying about the fact that I have a BRCA2 mutation.”

Although Theresa’s teenaged sons haven’t undergone genetic testing yet, she will see to it that they receive proper genetic counseling in the coming years.

“Get tested if you qualify, and if you discover that you have a gene mutation, follow protocol and share, share, share,” she says emphatically. “Who knows what my mom could have avoided if we’d gotten this information earlier? You can’t help your ancestors before you but your children and their children, and your extended family’s children – what an amazing gift you can give them by getting tested and passing on what you learn. If I hadn’t been tested, I might not be here today.”

Anyone can have a BRCA1 or BRCA2 gene mutation. Genetic testing is recommended for individuals whose family and personal health histories point to higher-than-usual chances of a cancer gene mutation. To learn your risk, take the Basser Center's quiz. Visit Basser.org for more information.