It only takes a few minutes to realize that Kate DiLullo is special: She’s confident, friendly, smart, and more. But, when her doctors said “Oh you are special,” Kate never imagined it would be because she carried both BRCA-1 and BRCA-2 gene mutations.

Although shocking, the news wasn’t too surprising for Kate. Cancer had always been a part of her family’s journey.

“Do you have any genetic mutations?"

Kate’s grandmother, Arlene, a breast cancer survivor, passed away at age 68 due to ovarian cancer, and her mother, Jane, developed ovarian cancer at 44 and had a recurrence at age 54. Despite what the family had gone through and their history of cancer, it still was challenging and emotional to discuss as a family the possibilities of Kate and her sister, Hannah, carrying the same gene mutations as the women before them. 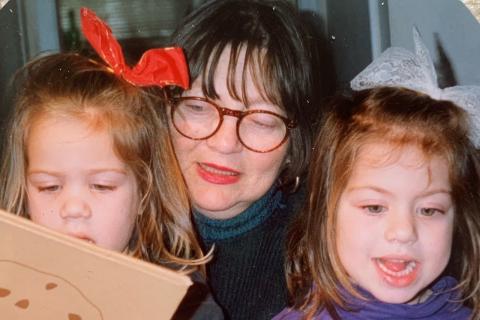 Kate’s mother was faced with the difficult decision of whether or not to have this discussion with her daughters at such young ages. Jane’s internal struggle quickly ended, however, when Kate went to her annual gynecology appointment where her gynecologist, in looking at Kate’s family cancer history, asked her if she had any genetic mutations. At the time, Kate was unfamiliar with the topic of genetic mutations and didn’t know if she carried any, but knew she had a strong family history of cancer. Kate was then introduced to the idea of genetic testing.

After learning of her results, Kate then called her mom to tell her the news that her mom had been struggling to present: Kate was a carrier of both BRCA-1 and BRCA-2 gene mutations.

When her grandmother was diagnosed with breast cancer in 1988 and ovarian cancer in 1996, genetic testing was nearly non-existent, and despite the advances over the past 20 years, it was still not offered as an option for Kate’s mom, Jane, before her first cancer diagnosis in 2002. It wasn’t until after Jane developed ovarian cancer that she learned of her own BRCA mutation.

“Cancer has always been a part of my family's life,” Kate said. “If my grandmother would've gotten tested, my mother would've gotten tested, and she would've known that she had the gene mutation then, and then the rest would've been history, but we obviously weren't given that opportunity. … And now we can actually do something about it and take care of ourselves and protect ourselves.”

The opportunity is what inspired Kate to take action and get ahead of a potential life-changing diagnosis.

Once Kate got tested and learned that she carried the mutations herself, she was eager to take advantage of the information.

Fortunately, Kate was blessed with incredible timing and learned of her diagnosis while pregnant with her first child, a son she named Cooper in 2015. Although her pregnancy was amazing news, it was all still a lot for Kate to handle.

“So much of me wanted to be like ‘you're pregnant - this is the best news of your life,’” she said. “But you also feel like it's a ticking time bomb.”

The next few months were a challenge. Being pregnant while knowing that she was a carrier of both BRCA-1 and BRCA-2 gene mutations made her worry about her child’s future.

Once Cooper arrived, Kate decided it was time to act and begin her preventative journey with annual cancer screenings monitored through her health care team.

After years of screenings- from breast MRIs to mammograms-  that ultimately ended with benign results but yielded much anxiety, Kate found out that she was pregnant with her second child, a daughter named Harper. In 2018, Kate spoke with her doctors and agreed to move forward with a risk-reducing surgical plan to help prevent her from developing BRCA-related cancers later. 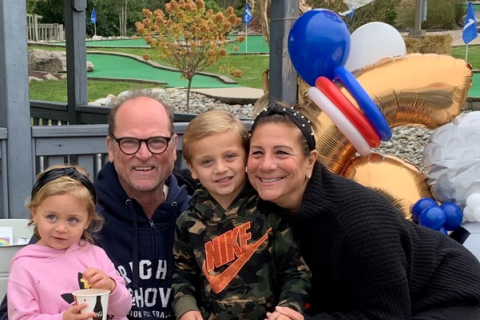 Making the choice to prevent ovarian cancer with surgery

Kate, guided by her Medical Oncologist, Douglas F. Beach, MD, decided to remove her fallopian tubes in an effort to prevent ovarian cancer during her C-section. However, within the first two years after Harper’s birth, Kate dealt with gynecological and bladder issues, including ovarian cysts and endometriosis which caused a lot of pain. In 2021 the pain became debilitating and Kate with her Gynecological Oncologist, Sarah H. Kim, MD, decided, at age 33, to have a hysterectomy.

Kate’s surgery was a success, and alleviated her ongoing pain. Tears of relief flowed freely when she reunited with her sister, an oncology nurse at Penn Medicine who is not a BRCA mutation carrier, while recovering from the procedure.

“To hear the doctor say ‘this was the right decision’” made the pain worth it now that the possibility that she would develop ovarian cancer was significantly reduced. Still, the question of whether she would get breast cancer still lingered in her mind.

Success of first surgery leads Kate to another

In all of her post-hysterectomy checkups, Kate was sure to keep tabs on any breast ultrasounds that looked suspicious. There were instances where her doctor would find a benign growth that they would monitor.

Ultimately, Kate decided that after the success of her hysterectomy, she did not want to wait any longer and chose to schedule a mastectomy and breast reconstruction. In February 2022, Kate had a prophylactic bilateral, nipple-sparing mastectomy with expanders put in by breast surgeon Alina Mateo, MD and a Penn Medicine plastic surgeon.

Once Kate was discharged and ready to unwrap the bandages, she saw (as the doctors had mentioned in recovery) that her right breast looked good but her left breast was purple and looked different. She learned that she had a thinning of the skin in her left breast, which is not uncommon after a mastectomy surgery. Kate’s care team embarked on their plan to get her left breast skin back to normal, with close watch.

“I'm in the best hands. Dr. Wu is amazing,” Kate said “My mother also had complications so I am hypersensitive to all of this. I really appreciate the communication, the due diligence, and the sense of urgency. That's so important for me.” 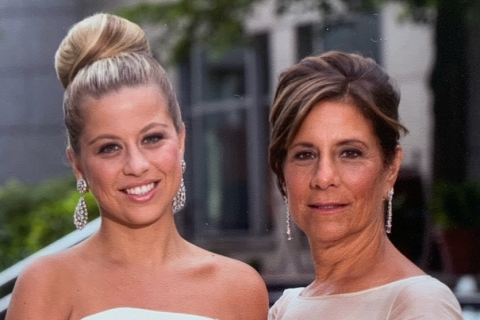 In April 2022, three months out from her original breast surgery, Kate knows she still has a journey ahead of her but she’s grateful that even though the past few years have been tough, she is ready to see the beauty of looking ahead: “I am like the normal population now. I have now cut down my cancer [risk] by 90%. I am everyone else.”

Kate’s mission is to become a resource for those who are not yet battling cancer but who do carry a BRCA mutation and are ready to take preventative measures.

She hopes to make an impact on other people’s lives who are wondering about their own family’s cancer history and how to get started. On social media, Kate has formed relationships with others who are going through similar experiences. She is happy to spread her family’s story in a relatable way and to educate others on the power of genetic testing.

Some people have reached out to her to say she has given them the extra push they needed to consider preventative surgeries, while others have confided in her that they are grateful to have someone to talk to after feeling so alone.

For now, Kate continues to focus on spreading the word in hopes of more medical advances in the near future.

Take a step toward answers

Genetic counseling and testing is recommended for individuals whose family and personal health histories point to an increased chance of a cancer gene mutation. Think you or a loved one might qualify? Take the BRCA risk factor quiz and learn for more information on genetic and counseling and testing.