“Despite the results, I’m more at ease than I was before.” – Dr. Bruce Gooberman

A pediatrician for the past 34 years, Dr. Bruce Gooberman never took his own children’s good health for granted. Given their family medical history, though, he’s always wondered if cancer could be lurking.

“My wife’s mother, aunt, and grandmother all had breast cancer. So when I first read about BRCA gene mutations, I wondered if my wife might carry one – and might have passed it to our daughter, Marcy.”

BRCA1 and BRCA2 genes are among the 20,000 genes inside the human body. Harmful errors (called mutations) in these genes cause an increased chance of developing certain cancers – breast and ovarian cancer in particular, which is why BRCA is often falsely believed to be a women’s issue exclusively.

Still, while information about the cancer risk for women who inherit BRCA1 and BRCA2 mutations is widespread, there has been much less focus on what it means for men. Even many medical doctors like Bruce didn’t initially realize that males factor into the BRCA equation.

“When my wife Carol saw a geneticist a few years ago and tested negative for BRCA mutations, I was relieved, thinking she – and therefore our daughter Marcy – were in the clear.” 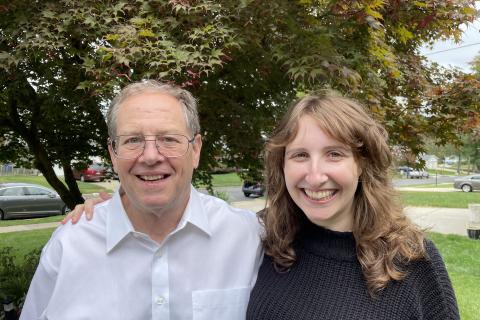 Soon after, he learned the truth: That males, too, can inherit, pass on, and develop cancer as a result of BRCA mutations. Considering his aunt died of breast cancer and his grandmother and sister from ovarian cancer, Bruce wondered: Could he carry a mutated BRCA gene? If so, did his adult children – daughter Marcy and son Evan – have it, too?

Around the same time, Marcy, now 29, was hearing a common refrain. “Every time I go to the gynecologist, they look at my family medical history and suggest I undergo genetic testing,” she says. Marcy had had extra tests ordered on a few occasions when doctors noticed something suspicious. Though results came back negative, the thought persisted: Could I have a BRCA mutation? Should I get tested?

“I was watching a TV series called The Bold Type,” Marcy remembers. “One of its characters was a woman who learns she has a gene mutation after her mother dies of breast cancer. I just had this feeling this topic would be something I’d have to deal with in my life.”

Bruce had never hidden his concern about his daughter’s health. Especially given his sister’s battle with ovarian cancer, he worried about the vague and undiagnosed abdominal pain Marcy has experienced on and off since adolescence.

“It became an ongoing thought for me – whether Marcy should undergo genetic testing,” says Bruce, whose only hesitation was the burden a positive result might inflict on his daughter. He even considered encouraging Marcy – who’s getting married next year – to freeze her eggs, in case there are complications or the need for a hysterectomy down the road.

But what he wasn’t worried about? Himself.

“I hoped I didn’t have a BRCA mutation. But I knew that if I did, the health implications are less severe for men.” Ironically, it was Marcy who’d pursue answers for them both.

With her dad’s birthday approaching in late 2020, Marcy had a unique gift idea: Genetic testing for them both. Because she lives just a few blocks from Penn Medicine in Philadelphia, she typed “BRCA testing” and “Penn Medicine” into a search engine. The Basser Center for BRCA at Penn Medicine appeared in the results. With her dad’s blessing, she scheduled an appointment for her and Bruce to speak with a genetic counselor on February 1st, 2021.

Bruce was surprised by the gift – and impressed.

“For a moment, I thought, ‘Do we really want to do this? Do we want to have this information?’” Bruce remembers. “But that feeling was fleeting. I was so proud of Marcy for taking a proactive approach to our health.”

Father and daughter were in close touch as Marcy completed their new patient questionnaires in advance of their visit with the Basser Center (“I’m better on the computer than my dad is,’ she says with a laugh). She gathered information on their family history of cancer, which by now included two extended family members (Bruce’s first cousin and his daughter) who’d tested positive for BRCA1 a few years earlier.

On February 1st, 2021, Bruce and Marcy headed to the Basser Center for consultations with genetic counselor Jessica Long, MS, CGC. “We could have gotten tested first and then had our consultation, but my dad was adamant that we first sit down with the team and learn more,” Marcy says.

Bruce in particular had a lot of questions. The Basser Center team had answers. “We covered so much ground at that first appointment,” he remembers. “It was very thorough. Ms. Long really put us at ease and taught us so much.” Father and daughter decided to move forward with testing.

Bruce would go first. If he tested negative, Marcy wouldn’t need testing, since her mom Carol has already tested negative and BRCA mutations are almost always inherited from at least one parent.

Bruce received his testing kit in the mail, spit into the tube as instructed, sent it to the lab, and waited for results. Within a few weeks, Ms. Long called Bruce and Marcy – who’d asked to both be on the call when results were shared – with the news. Bruce has a BRCA1 mutation.

His first thought was Marcy. Had he passed the mutation along to her? Bruce’s confirmed BRCA1 mutation meant Marcy had a 50% chance of the same. Now it was Marcy’s turn to spit into the tube and send it to the lab. Her hunch was confirmed. Marcy also carries a mutated BRCA1 gene.

A deep breath – and a plan

Bruce and Marcy each met separately with Susan Domchek, MD, medical oncologist and executive director of the Basser Center. They had new questions now, mostly about Marcy given BRCA’s implications for women. Should she freeze her eggs? Take preventative measures such as a hysterectomy or mastectomy?

Dr. Domchek shared information that helped put Bruce and Marcy’s minds at ease, including the fact that until the age of forty, Marcy’s chances of ovarian cancer are still relatively low. In terms of breast cancer risks, Dr. Domchek encouraged Marcy to begin ongoing screenings, but said it was fine to wait until after her wedding next year to consider a preventative mastectomy. She also let Marcy know that there is no reason right now to freeze her eggs.

“Dr. Domchek also reminded me that a lot can happen between now and when I’m forty years old in terms of research and medical breakthroughs. That was helpful to hear,” Marcy says.

Moving forward, Marcy will undergo a breast MRI and mammogram every six months to ensure that if cancer develops, it’s detected early.

In a separate meeting with Dr. Domchek, Bruce learned more about his own risks as a male BRCA1 carrier – which, while fewer, still exist. “We talked about breast cancer in males, pancreatic risks, and a lot more. And Dr. Domchek told me how much she enjoyed her appointment with Marcy.”

In light of Bruce and Marcy’s results, Marcy’s older brother Evan decided to pursue genetic counseling with Ms. Long at the Basser Center, too – and discovered that he, too, inherited a BRCA1 mutation. Evan’s cancer screenings will start in a few years, when he’s thirty-five.

Today Marcy is enrolled in two medical research studies through Penn Medicine. A graphic designer, she is also enjoying a new job and planning her wedding.

Bruce promises his family that he’ll monitor his health carefully and attend routine medical appoints. For him, Marcy’s gift of genetic counseling and testing at the Basser Center – and the insights it ultimately gave both of his children – is one he’ll never forget.

“The value of the Basser Center can’t be overstated. From our first visit with Ms. Long to our time with Dr. Domchek, it was comprehensive and complete. We were not left in the dark in any way, and the high level of skill among the team is apparent. Knowing Marcy is managing her risk of cancer in a proactive way, with top experts, gives me relief. I hope she, Evan, and I can continue to travel this journey together.”

Take a step toward answers

Genetic testing is recommended for individuals whose family and personal health histories point to an increased chance of a cancer gene mutation. Think you or a loved one might qualify? Take the BRCA risk factor quiz and learn for more information on genetic testing and counseling. 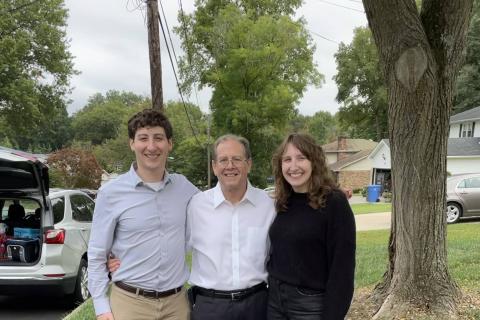